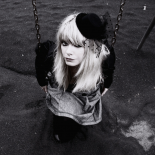 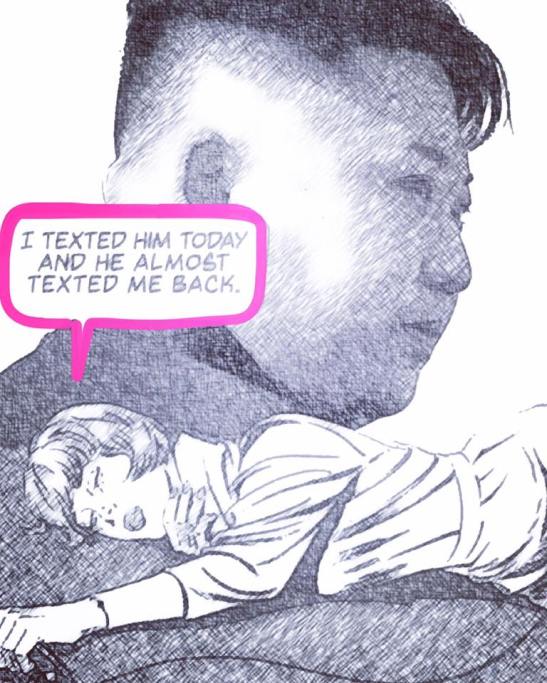 For a while now I’ve been at extreme unease regarding the possibility of nuclear conflict with North Korea. I live in Hawaii, and grew up in San Diego – both extremely attractive targets due to their military bases, and in the case of the 50th state, its vulnerability. My mom used to recount tales of duck and cover drills during the Cold War, and she said she always asked her teachers and parents if San Diego (due to the Navy) would be the first to go. 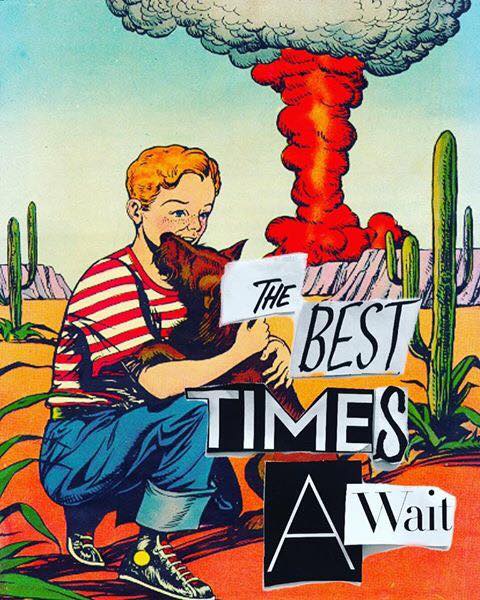 Flash forward to the 1980s when things seemed a bit more escalated with the USSR. There was a certain “nuclear aesthetic” in music, film, and fashion. I remember having trousers I dubbed “atomic pants” because they were punctuated with distressed burned-out holes. When I was in 7th grade we had the TV phenomenon of The Day After and it was all we could talk about for weeks. 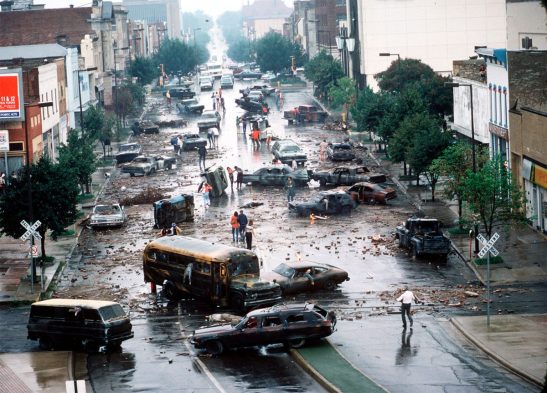 Scene from The Day After

That same year we were all humming the infectious 99 Luftballons and watching Nena stroll through post-apocalyptic terrain on the nascent MTV.

I used to use it my World History class as we studied how the arts reflect and react to society and current events. 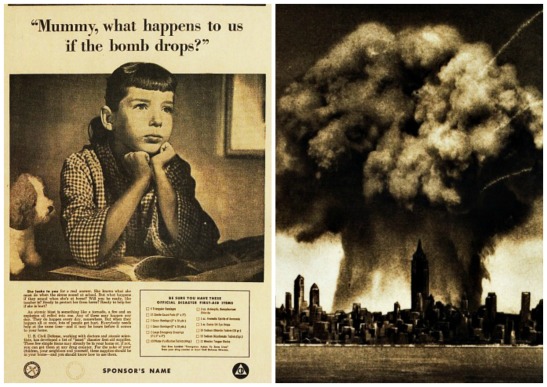 For some time we’ve pushed nuclear armageddon out of our heads (or at least to the back), especially since we’ve been a bit preoccupied with terrorism from radicals. In reality, those in the know (i.e. world leaders and their advisors) have understood the precariousness of the situation, particularly when it concerns the rogue state of North Korea and its cult-like regime. 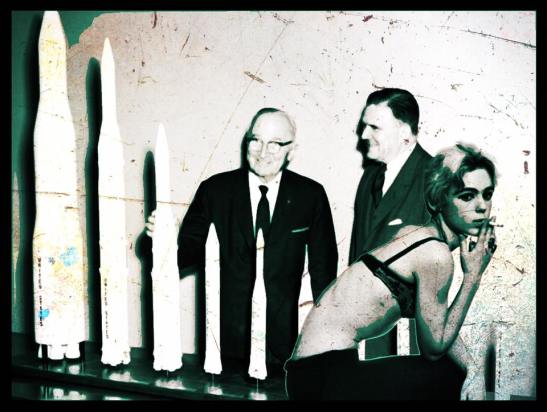 Kim Jong-Un’s posturing and actions in the past year have made me increasingly wary. I live by Kaneohe Marine Base, and have witnessed an escalation in air drills (I mean, constant planes flying over my house all day). In the early fall of 2017 I started creating some sardonic digital collages I called #mushroommoments.

These were attempts to use dark humour to both deal with my fears and put it out there for folks to think about. Usually I’d depict nonchalant people in the midst of a missile attack or with the iconic mushroom wafting casually in the distance. 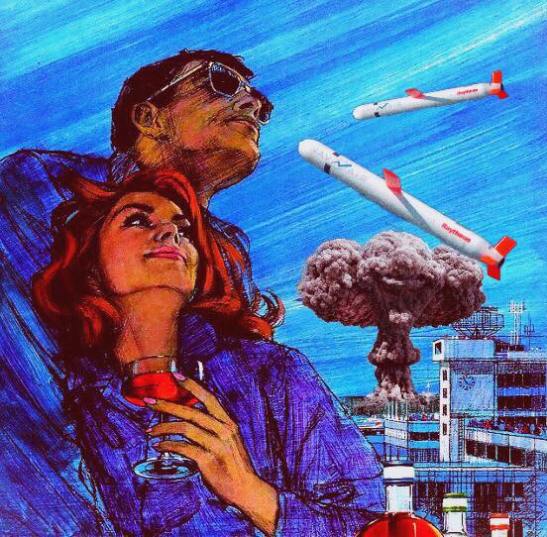 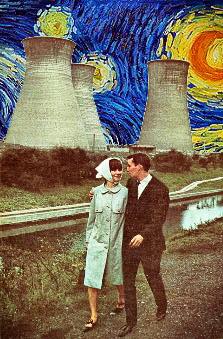 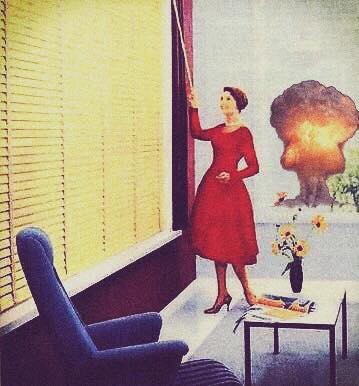 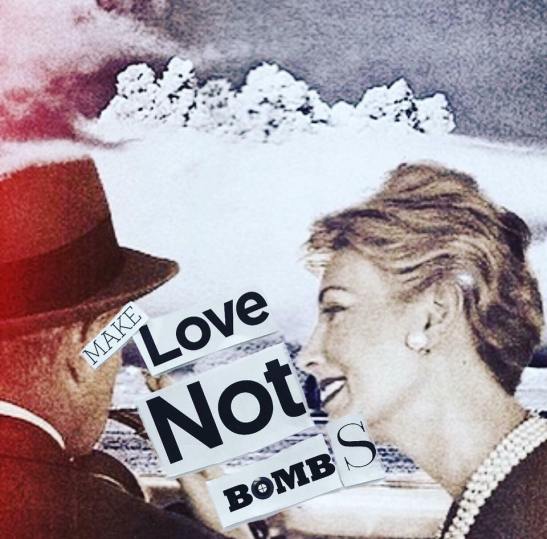 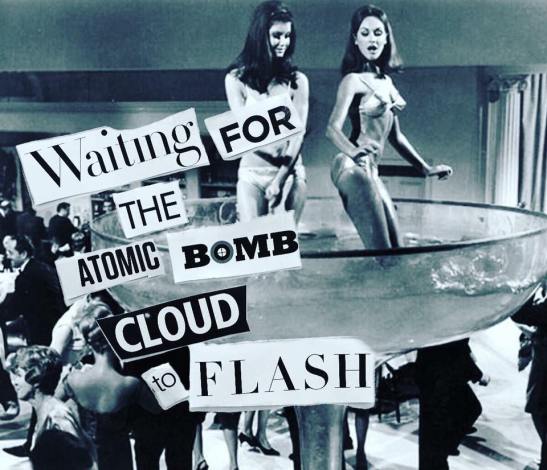 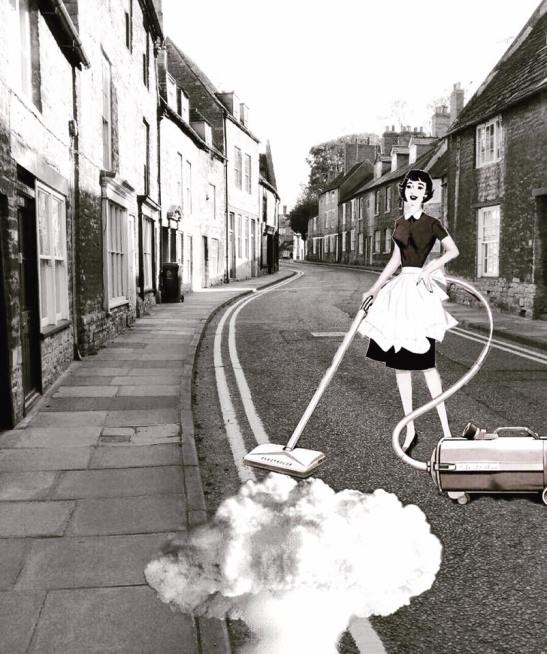 What was more shocking was receiving a message from my daughter’s school saying they were implementing ballistic missile drills each month. I mean, how does a parent even digest that?

Students at a Brooklyn middle school have a ‘duck and cover’ practice drill in preparation for a nuclear attack; silver print, 1962. From the New York World-Telegram archive. (Photo by GraphicaArtis/Getty Images)

Little did I know I would have my own “mushroom moment” very soon.

I’d woken up slightly early with plans to get a head start on some work. The first thing I do (bad, I know), is check all my social media ( a result of feeling quite isolated out here in the middle of the Pacific). And then, a buzz… 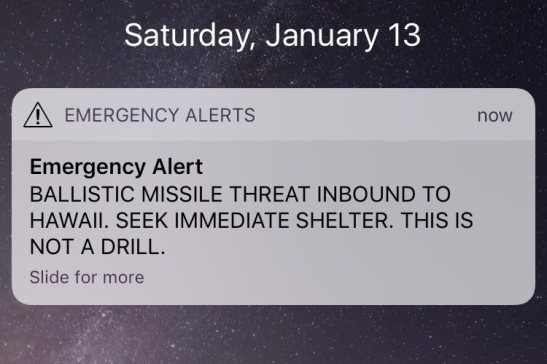 It took me seconds between my heart sinking into my stomach and the adrenaline rush to waking up my family. I still look at this message and gulp. I’ve been through a lot in my time…everything from kidnapping to assault to cancer (including the effects of radiation) to my mom’s cancer, and her dying in my arms, but nothing really prepares you for the surrealism of this. 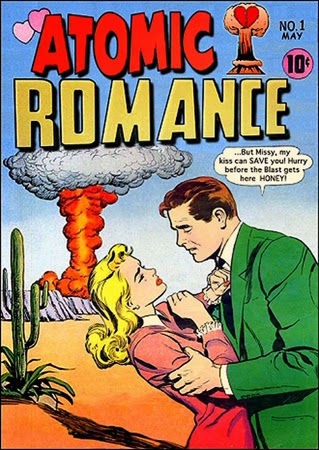 I let my imagination get the better of me.

Instead of being on task I was slightly hysterical (though I did think to shut all the windows and get away from them). Not hysterical in the flailing arms kind of way, but in the stunned expression, sobbing and heavy breathing kind of way. At that moment the most important thing for me was to resolutely die how I wanted to die…holding my daughter’s hand and hugging her.

As we huddled in the hallway with a comforter ripped from the bed and the unamused cat practicality swept in. Why did I not hear any sirens? Why was it difficult to find info on the TV, although finally finding the red ticker tape message confirming the attack on one channel. But I’ve been through numerous tsunami alerts, and they always interrupt EVERY station. I fiendishly checked Twitter and Facebook and quickly found others confirming this was not a hack of my phone – this was real.

But what was real, really?

I mean, we had so many conflicting messages. No sirens, but a text. It’s on TV but not every station.

We can’t get through to the proper websites. Nothing from the Federal Government on social media. I didn’t know WHO or WHAT to believe, but I wasn’t taking any chance. Because if you have only 10-15 min to before impact what harm is it to take every precaution?

I can only say that the worse thing was not knowing. The worse thing was my imagination. We have no clue what the most recent iterations of nuclear warheads would do. (since Saturday, I’ve watched a few video docs on the Tsara Bomba, which was 3,000 times more powerful than Hiroshima). We are so conditioned to films showing traditional warfare or extreme attacks like the Death Star blow up that I’m not sure what to expect from a modern thermonuclear disaster. I do know I hoped it would come quickly and we’d be annihilated on the spot rather than survive to face more trauma. I think I was most afraid of the sound it would make.

After 20 minutes of huddling I became suspicious…we should be gone by now. But still, no official word, though doubts were percolating on Twitter.

When someone much more eloquent than I writes a book about this it might be called 38 Minutes of Hell or something. Finally, all Hawaii residents and tourists received the “oops it was just a false alarm” message. As for me, I poured a whisky (yes, at 9 am) and spent the rest of the day in a daze, still trying to push past my shock. 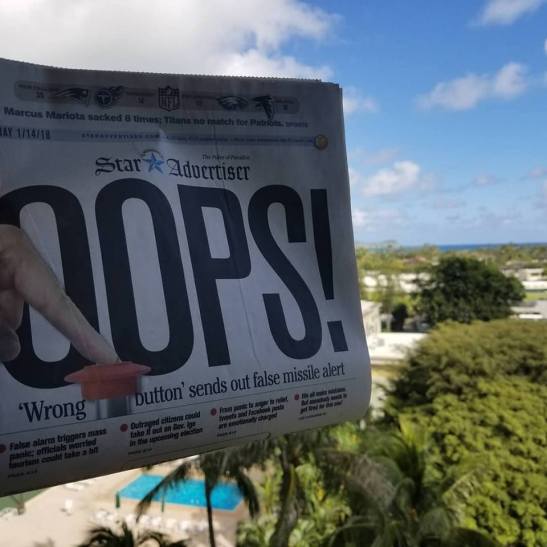 I’m not going to go into my disgust at tweets mocking this incident or even my exasperation when I see the words “at least it was fake”, or “Kim probably couldn’t hit Hawaii anyway”.  As I posted on Facebook,

It might have been a false alarm but the threat is very real.

Perhaps more frightening than world leaders’ brinkmanship games is the possibility of human error. Tiny mishaps (or in this case bad UX design) that result in panic and mass hysteria, and ultimately, world war. We know this from history. “Oppenheimer’s deadly toy” is too dangerous for such mistakes. And, no one seems to be even talking about the environmental catastrophe that can happen with even a warhead test (earthquakes…tsunamis…radiation poisoning…). 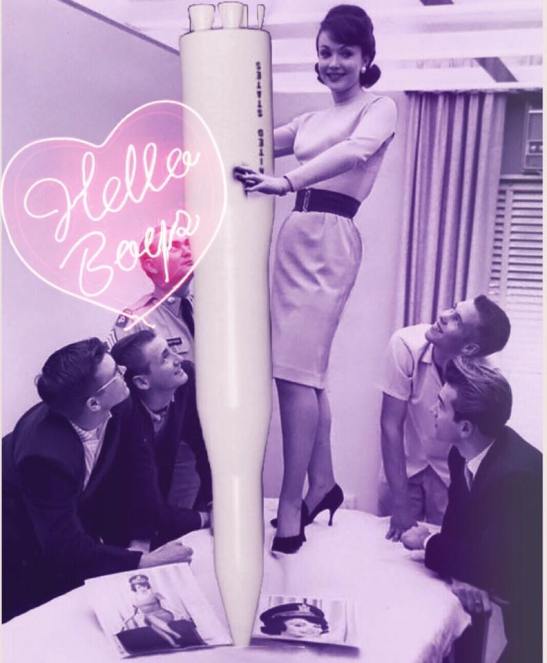 But this post is, in an effort to squeeze some positivity out of this situation, really about the

Taking a cue from Sting and Nena (and maybe a bit from Picasso’s Guernica), I immersed myself in sort of an expressionist exercise, making poetry and visual art (analog and digital). I wish I could say I did more yoga or cleaned the house, but oh well.

First off was another installation of my #lessandmore series (aka “line and caret from Intention: Critical Creativity in the Classroom). The idea is to take an expression and make it mean the opposite by changing the words as little as possible. I usually don’t post profanities to social media but… 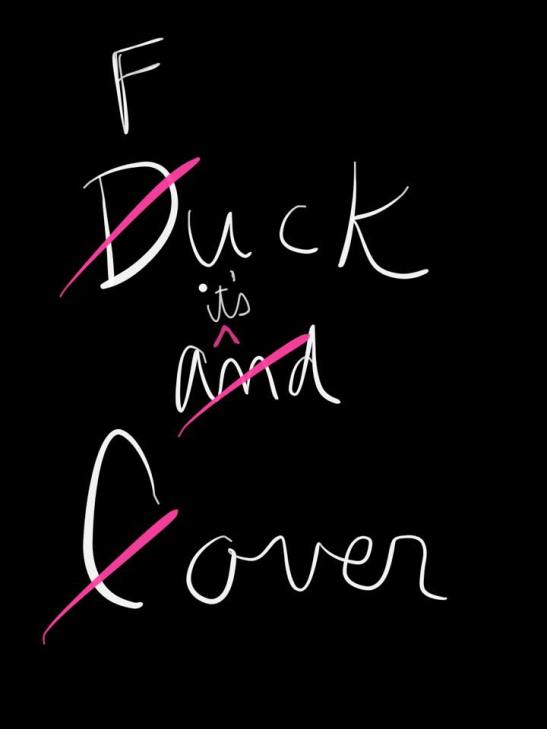 The second was a poem I wrote upon waking on Sunday, exactly 24 hours after the infamous text. It’s called “Inbound” not only as a reference to the text but because I was looking into myself as to what mattered to me in my last 15 minutes of life. 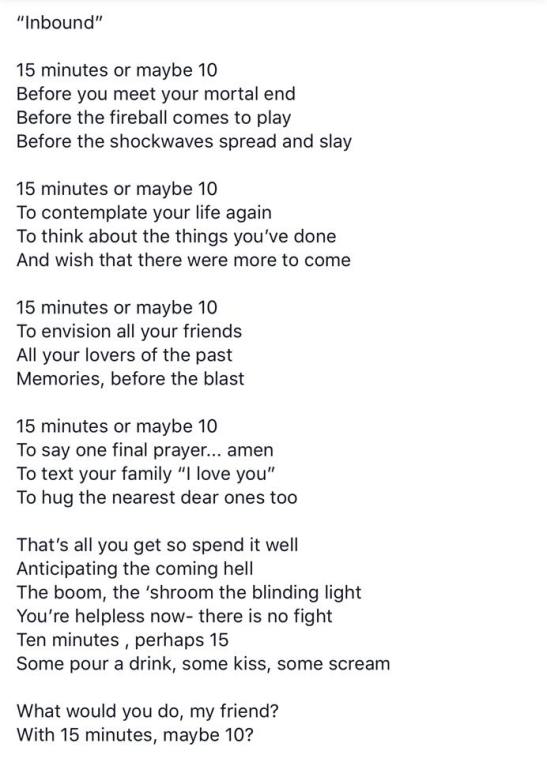 Then, I made some digital art in homage to Oppenheimer’s famous quoting of the Bhagavad Gita : 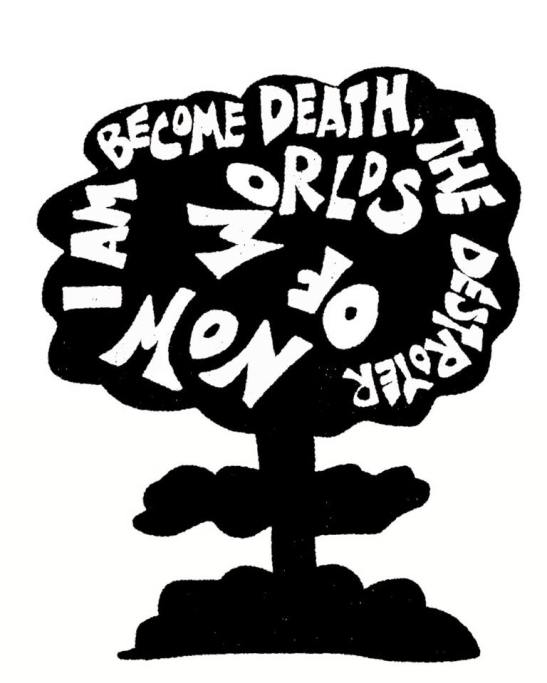 Finally, my daughter and I spent some time Sunday painting (admittedly I’ve not done watercolour very much)…she drew daisies and I did this:

which I later edited digitally to this: 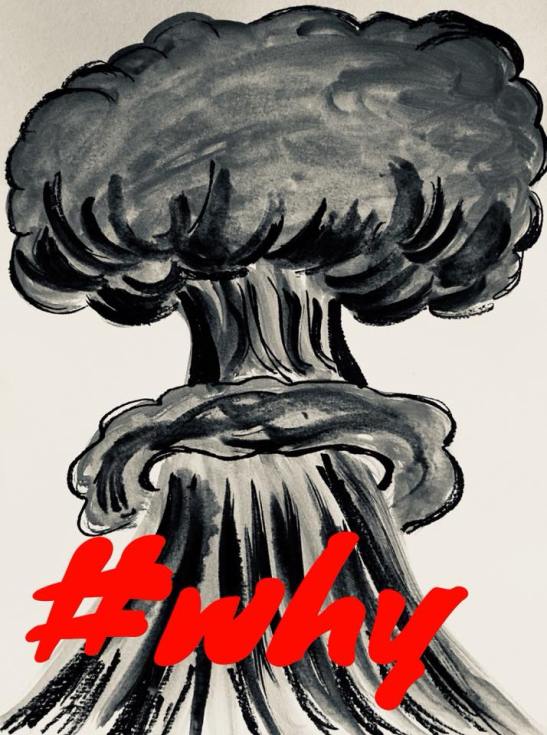 As I have always mused, art puts the ART in cathARTic.

Making things has gotten me through cancer, break-ups, writers’ block, existential crises – you name it.

When faced with impending destruction – we must do the opposite: CREATE.

For me, producing and sharing various types of artistic response is better than any medicine. I don’t do it for an audience, though I’m happy to post, because in my experience if it can make a difference for or inspire just one person it is worth it.

A while back I chanced upon a Henry Miller quote that became my personal motto:

As a metaphor it made perfect sense to me…but after Saturday it’s become more than a metaphor. It is my solace. It is my sanity. 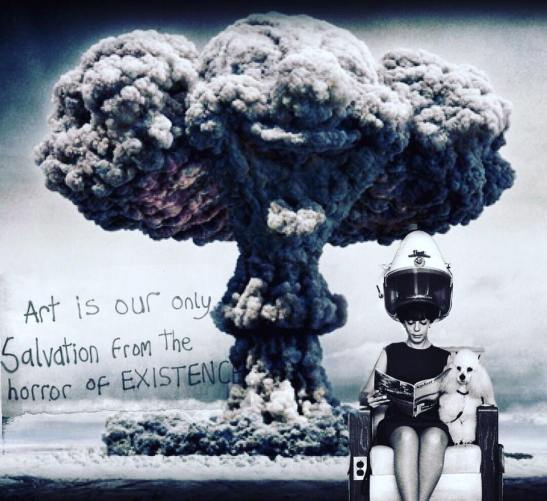 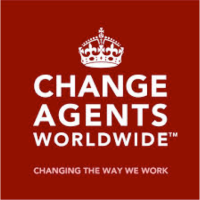